Just added to your cart

Now taking PRE-ORDERS for collection at the Hive Life conference in Tennessee this January. Click here for details. 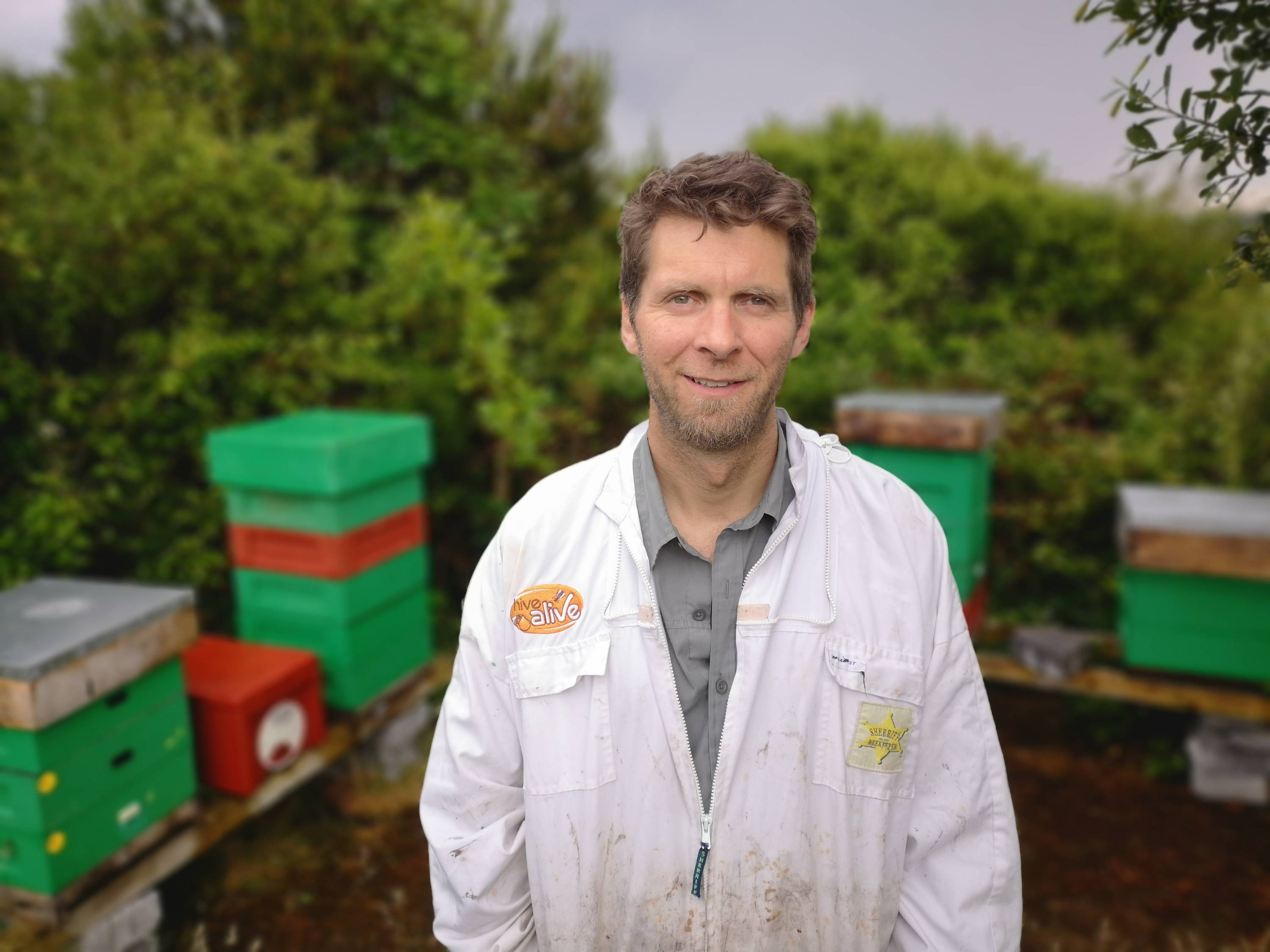 How did I get here?

How did the creator of the world-leading feed supplement for bees, HiveAlive get to where he is today?

Dara Scott’s passion for all things honeybee related began with a trip to New Zealand over 20 years ago. The physics graduate who had been working in medical diagnostics took a year out to explore New Zealand and became fascinated by the amount of beekeeping that was going on there.

“Everywhere I went I could see beehives”, he says of his New Zealand experience. In Ireland, where Dara is from, all the hives are hidden behind stone walls. Reading up on beekeeping, he loved the idea of the symbiosis of the beekeeper helping the bees and the bees returning the favour with honey. Upon returning he prepared for getting his own hives. He began with a small cast swarm captured near his home that a beekeeper collected for him. The apiary expanded and grew from there but so too did his frustration with the lack of natural methods to keep the honeybees healthy.

“I wanted to keep my bees as healthy as possible so that they could fight off diseases and stresses and also be more productive and survive better. The west of Ireland is definitely not the easiest place to keep bees!” says Dara. “It is one of the windiest and wettest places in the world with rarely having temperatures above 20°C/68°F. Bees can survive the cold and the heat but rain and wind are not their friends.”

Still, Dara manages to get a reasonable honey return every year and builds nucs for beekeepers in the spring. He is keen on promoting Ireland’s native honey bee Apis mellifera mellifera (Amm). 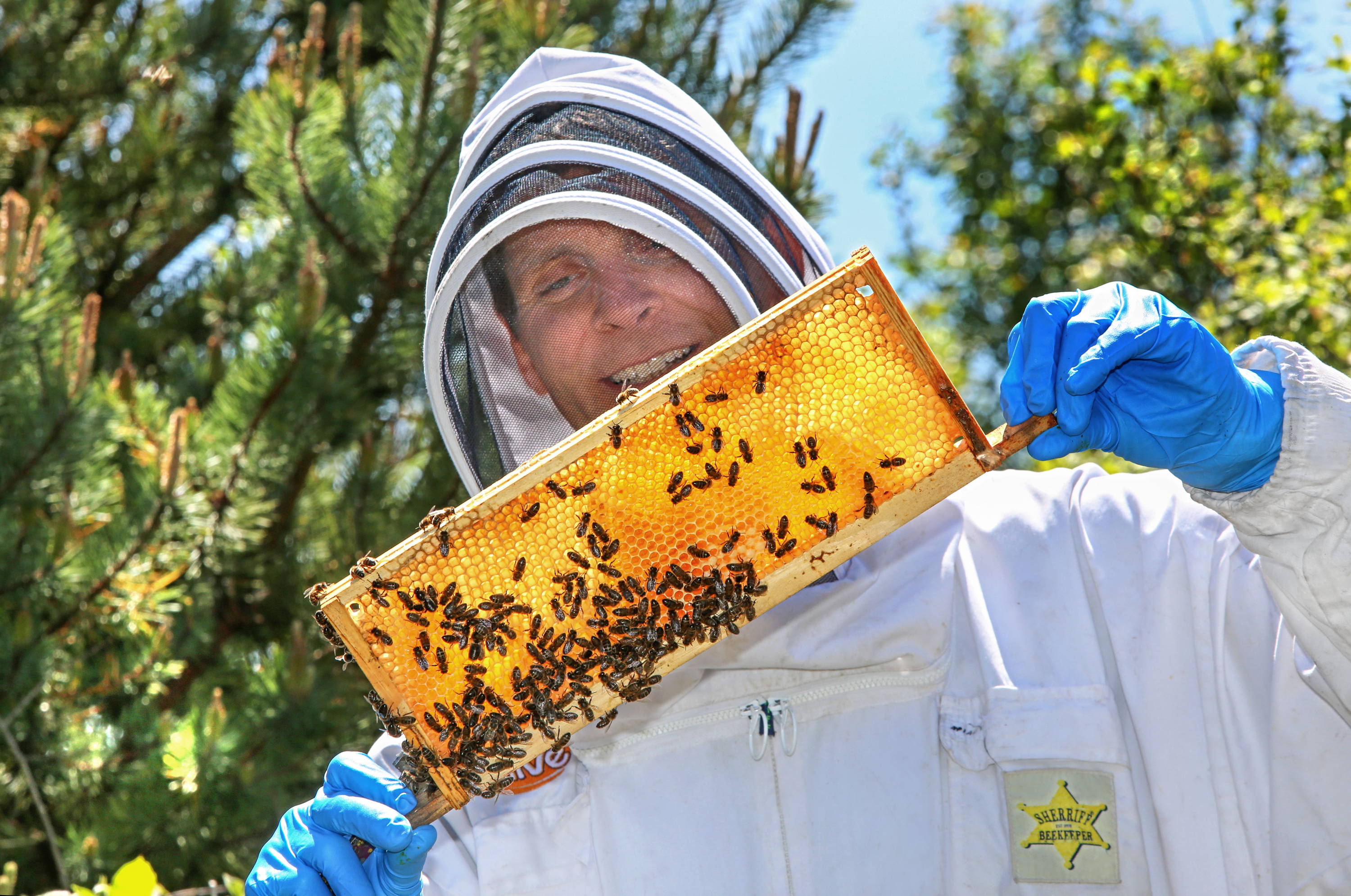 This bee was once spread across the whole of Europe but studies have shown that Ireland may have the last significant, stable population of Amm, because in the few other places where it does still survive in Europe, its genetics have been severely compromised by introgression from other strains. By keeping the nucs over the winter Dara can get them to new beekeepers early in spring when they are looking for them. “By providing these beekeepers with an option to obtain native bees early in the spring they are less likely to import different sub species from the continent which additionally can carry diseases not yet in Ireland”, says Dara.

Ireland has a long history of beekeeping, despite the inclement weather. Over 1600 years ago beekeeping was so important to Gaelic Ireland that there was a complete list of laws dedicated to beekeeping. The bee laws, called the “Bechbreatha” were the most important of all the Brehon Laws relating to land and agriculture at the time. Over twenty pages were dedicated to bees and beekeeping covering swarms, hives, honey production and so on. One law in particular shows how high a value was placed on bees. If a person who was stung by a bee had not retaliated by killing the bee they would be entitled to a meal of honey from the beekeeper. If, however, the person died from the sting then two hives were paid in compensation to their family!

Dara has a degree in physics and spent many years working in R and D for medical device companies. After his visit to New Zealand, Dara landed a dream job with the Woods Hole Oceanographic Institution, USA. He spent almost a decade exploring the planet’s deepest oceans with one of the world’s deepest underwater vehicles, a robot called Jason, which could travel to depths of over 4 miles. Dara had the opportunity to explore multiple exotic locations such as the Pacific islands, Easter Island and the Aleutian Islands in Alaska. On his travels around the world Dara met with many beekeepers and learnt the many ways people keep bees. From Carniolans to Russian mite resistant bees, Italians to Apis mellifera jemenitica in the Middle East, Dara has seen a lot of bees!

The work was very interesting and there were lots of fascinating experiences like massive lava flows into the sea, the world’s first live recording of an underwater earthquake and piloting the robot around giant, thirty meter, hydrothermal vents with 300°C/572°F water piping out of them. The craziest adventure was probably climbing a volcano in Papua New Guinea that exploded the following day! However, the travelling took its toll on Scott. “I’m six foot six and going to Hawaii takes a painful three days”, he says with a laugh. “Seriously though, I really missed having a proper garden and being able to mind my bees properly. By the end, I was sick of it.”

He wanted to focus on developing a solution to improve the health of his bees and began work on developing HiveAlive. “I was lucky, Ireland has some of the world’s top seaweed experts, so I got help from them in developing HiveAlive. These scientists knew exactly what seaweed extracts to choose and had special extraction techniques to be able to pull out all the anti-bacterial, anti-fungal, anti-viral and immune stimulatory properties that seaweeds naturally have along with a range of vitamins, minerals and amino acids. “I knew about the health benefits of seaweeds for humans and at the time they were just starting to be developed for animals. Now, they are an extremely popular feed ingredient used commercially to reduce the need for antibiotics, boost the immune system and improve gut health.” He was intrigued to find out would the same benefits apply to bees. Through government supports Dara collaborated with scientists from several universities across Europe in developing and testing what would soon become HiveAlive.

His theory was correct. HiveAlive has since been tested in multiple field studies around the world. Results consistently show that feeding hives with HiveAlive makes the colonies more productive – they have more brood and more honey with less disease, in particular Nosema, and lower overwinter losses. “To be honest we could spend lot of money on marketing but the best marketing team we have are the beekeepers that give HiveAlive a proper try over a full year. Once they do, they are our best advertisers as they can really see the benefits and are keen to tell their friends. People don’t believe our claims when we tell them, but they believe them when their friends have seen it for themselves. That is genuinely the most rewarding part of the job, when I go to shows and people tell us how much they love using HiveAlive.”

“We are currently selling HiveAlive in over 40 countries worldwide, which means we have a lot of labels to look after for all the different languages”, he jokes, “However, it is very interesting to get to interact with so many beekeepers worldwide who all have different methods of beekeeping and tips to share”. Dara reflects that he is missing the comradery at beekeeping tradeshows and conferences worldwide due to the lockdown but is positive about the future. “Beekeepers are a tough bunch, constantly being challenged by weather, disease and now Coronavirus. I think we will all adapt and grow in the coming months and years”.